Home » About us » Fabio Agostini 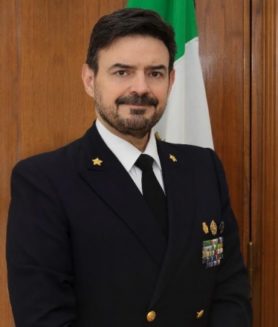 Rear Admiral (LH) Fabio AGOSTINI was born in Rome on 15 May 1966 and joined the Naval Academy in October 1986.

He received his commission as Ensign in November 1989 and, at the end of his training period at the Navy Training Centre in Taranto, he received the “Artillery” Qualification and embarked on the Maestrale Frigate on which he deployed to the Persian Gulf within operation Desert Storm.

He participated in NATO operations in former Yugoslavia on board the Audace Destroyer.

Subsequently, he served aboard the Grecale Frigate on which he deployed on Operation Restore Hope in Somalia.

In 1995, after obtaining the Guard Command qualification and the qualification as Firing Director, he joined the Minerva Corvette stationed in Augusta as Head of Operations.

He then participated in numerous Albania-related migration control activities and Fishery Supervision missions.

On board the Minerva he also deployed for the Basic Operational Sea Training at the Royal Navy in Plymouth, England. In 1997, he attended the 20th Navy Staff College course at the Istituto di Guerra Marittima in Leghorn.

In 1998, he attended the Naval Command School and the English full immersion course at Melton College in York (UK).

In the same year, he was appointed Commander of the Cassiopea Patrol Ship. Until September 1999, he deployed on 11 fishing supervision missions in the Sicilian Channel.

Later, he joined the Garibaldi Helicopter Carrier as Chief Artillery and Missile Section. In September 2001, he was appointed Head of Operations aboard the same ship with and, following the tragic events of September 11, he deployed on Operation Enduring Freedom in the Indian Ocean.

On his return to Italy, he was briefly assigned to the Mimbelli Destroyer to deploy on Operation Enduring Freedom again as intelligence and public information officer to the Commander, Italian-led European Naval Task Force commander.

In 2004, having completed his assignment on the Garibaldi Helicopter Carrier, Rear Admiral Agostini was selected for the Joint Services Command and Staff Course at the UK Defence Academy in Shrivenham.

He returned to Italy in 2005 and was assigned to the Centre for Advanced Defence Studies in Rome, Italy as a Tutor.

In such position, he supported the Minister of Defence and the Undersecretaries for Defence in their parliamentary activities, in particular all matters relating to International Politics, International Peace Missions and armament programmes.

Since September 2009, the Minister of Defence appointed him as member of the Personnel Committee of the Military Corps of the Italian Red Cross.

In July 2010, he took up the position of Deputy Head, Alliances Policy Branch, Defence General Staff.

In his tenure, he focused on political and military interests of defence within the relevant international organisations – specifically NATO, the European Union, and the United Nations – and within the framework of Multinational Forces.

From 27 September 2013 to 26 September 2014, Rear Admiral (LH) Agostini served as Commander, Duilio Ship and deployed on NATO exercises Brilliant Mariner in the Mediterranean and Steadfast Jazz in the Baltic Sea.

From 27 September 2014 to 31 July 2016, he was assigned to the 3rd Division, Naval Plans, Operations and Strategy of the Navy Staff, where he first was Head of the newly established Dual Use Branch.

The branch contributes to the developing dual and complementary activities through Navy means and capabilities for the benefit of the national community.

In the same Division, Rear Admiral (LH) Agostini held the position of Head, Internal Coordination. In May 2016, he was also appointed Head, Image and Promotion Branch, Public Information and Communication Office.

From 18 March 2019 to 1th January 2020, he was Head, Public Information and Communication Department, Defence General Staff.

Since January 2020 he is the Commander of the Joint Deployable Command of the Italian Joint Operation HQ in Rome and, from 21th of February to the 31st of March 2020 he has served as Operation Commander of EUNAVFOR MED Operation SOPHIA.

On the 31st of March the Council of the EU adopted the decision to launch EUNAVFOR MED Operation IRINI, and with the same decision Rear Admiral Fabio Agostini has been appointed as Operation Commander.

Rear Admiral (LH) Agostini, who lives in Rome, is married to Mrs. Stefania Antonia Knabe, a German national, and together they have two children, Pier Giorgio and Elena Sofia, who are both students in Germany.

Rear Admiral (LH) Agostini graduated in Maritime and Naval Sciences at the University of Pisa, and hold a Master’s Degree in Defence Studies from the King’s College, London (UK).

In 2011-2012 he attended the Common Security and Defence Policy High Level Course organised by the EU. He has also followed many courses and took advantage of training opportunities in the field of public information and communication, especially at the National School of Public Administration in Rome, Italy.

Since 2019, he is a teacher at the same school, where he enrolled in the Master’s Programme in Public and Institutional Communication, and the Master’s Course in Leadership, Change Management and Digital Innovation at the Centre for Advanced Defence Studies in collaboration with the University of Salerno (graduation expected in June 2020).

Thanks to his background, he has been a lecturer in seminars held at several civil and military organisations including, inter alia, the Centre for Advanced Defence Studies (Rome), the Naval Academy (Leghorn), the Air Force Academy (Pozzuoli, Naples), Advanced Maritime Studies Institute (Venice), the Naval NCO Academy (Taranto), the National School of Public Administration, LUISS University and La Sapienza University (Rome), the Piacenza University, the Chamber of Commerce (Taranto), the Guardia di Finanza School (Ostia, Rome), the Italian Press Federation, the Journalists’ Association of Liguria, the Journalists’ Association of Lazio, the Federation of Public Relations (FERPI), and the “Jus et Pax” Training, Research, and Studies Centre.

As part of his institutional tasks, Rear Admiral (LH) Agostini organised several seminars on NATO, the European Union’s defence and security policy, several press conferences on the occasion of events/activities on the Navy and Defence in general, and an international seminar on climate change titled “Maritime Implication of Climate Change”.

He has supported the organization of several maritime-related seminars and conferences at universities and study/research centres at the universities of Trieste, Bologna, Parma, Perugia, Bari, and Rome (La Sapienza and Tor Vergata).

In addition to the decorations for his participation to several peacekeeping missions, Rear Admiral (LH) Fabio Agostini has received the following awards:

– Knight of the Military Order of Italy;

– Silver Medal of Merit of the Italian Red Cross;

– Mauritian Medal of Merit for fifty years of military career

– Honour insignia for service at the Minister of Defence;

– Medal of Merit for long command;

– Golden Cross for Seniority of Service; 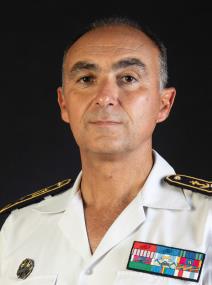 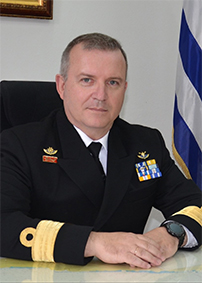